Chaddy’s Charters is an award winning New Plymouth tourist institution. It has run almost daily trips out around the Sugar Loaf islands since 1993. 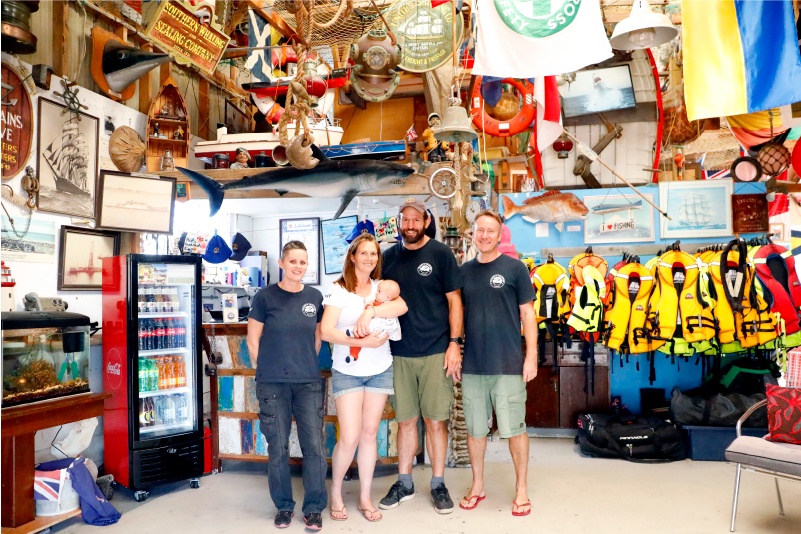 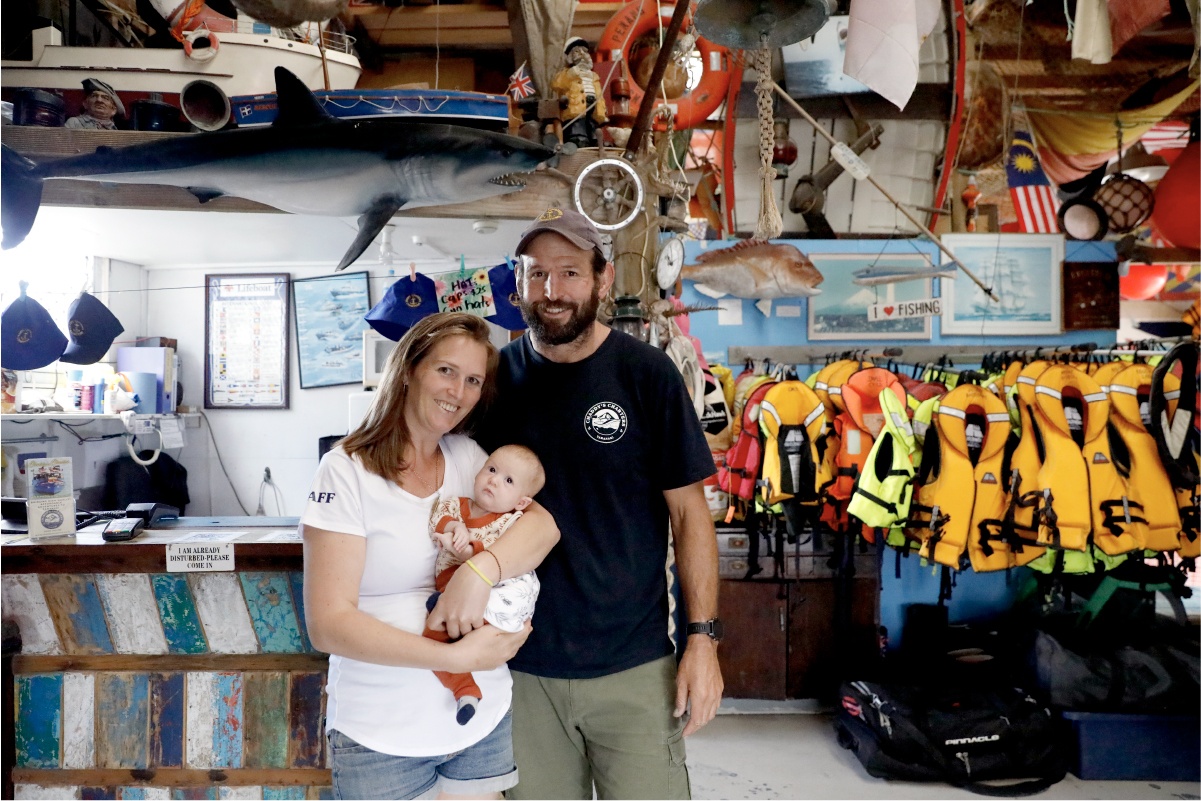 Carl Hayman born in Taranaki, started his professional rugby career playing for the Otago Highlanders. Carl was then chosen to play tighthead prop for the All Blacks gaining 45 caps for his country. In 2007 he moved to Europe and played for Rugby Club Toulonais (Toulon) where he helped the team win the Heineken Cup 3 times. After retiring from rugby, Carl returned to his beloved Taranaki and with his partner Kiko purchased the Chaddy’s Charter business in 2020. Carl is our in house skipper for Rescue III and loves being out at sea.

Kiko Matthews, born in the UK, started her professional career as a science teacher before a serious illness made her change her perspective on life. Kiko started a successful Stand Up Paddleboard business in London before taking up rowing in 2017. A year later she became the fastest woman to solo row unsupported 3280 miles across the Atlantic Ocean. Kiko is a keen environmentalist and later went on to ride 7000km around the coast of Great Britain raising awareness for pollution by organising beach cleans every evening with local communities. Whilst Carl skippers the boat, Kiko manages the business side of Chaddy’s Charters and looks after their new baby, Genevieve Ocean. 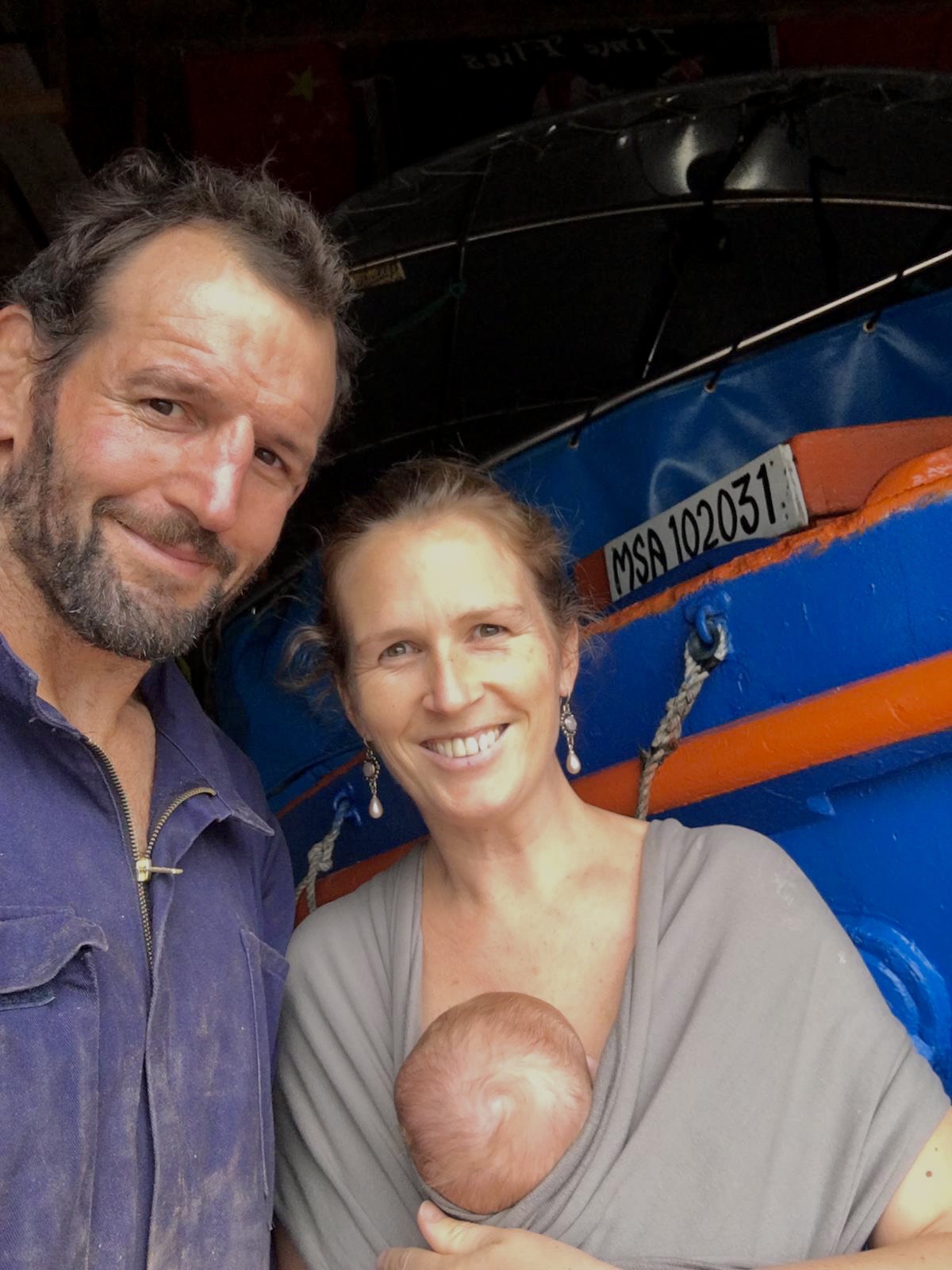 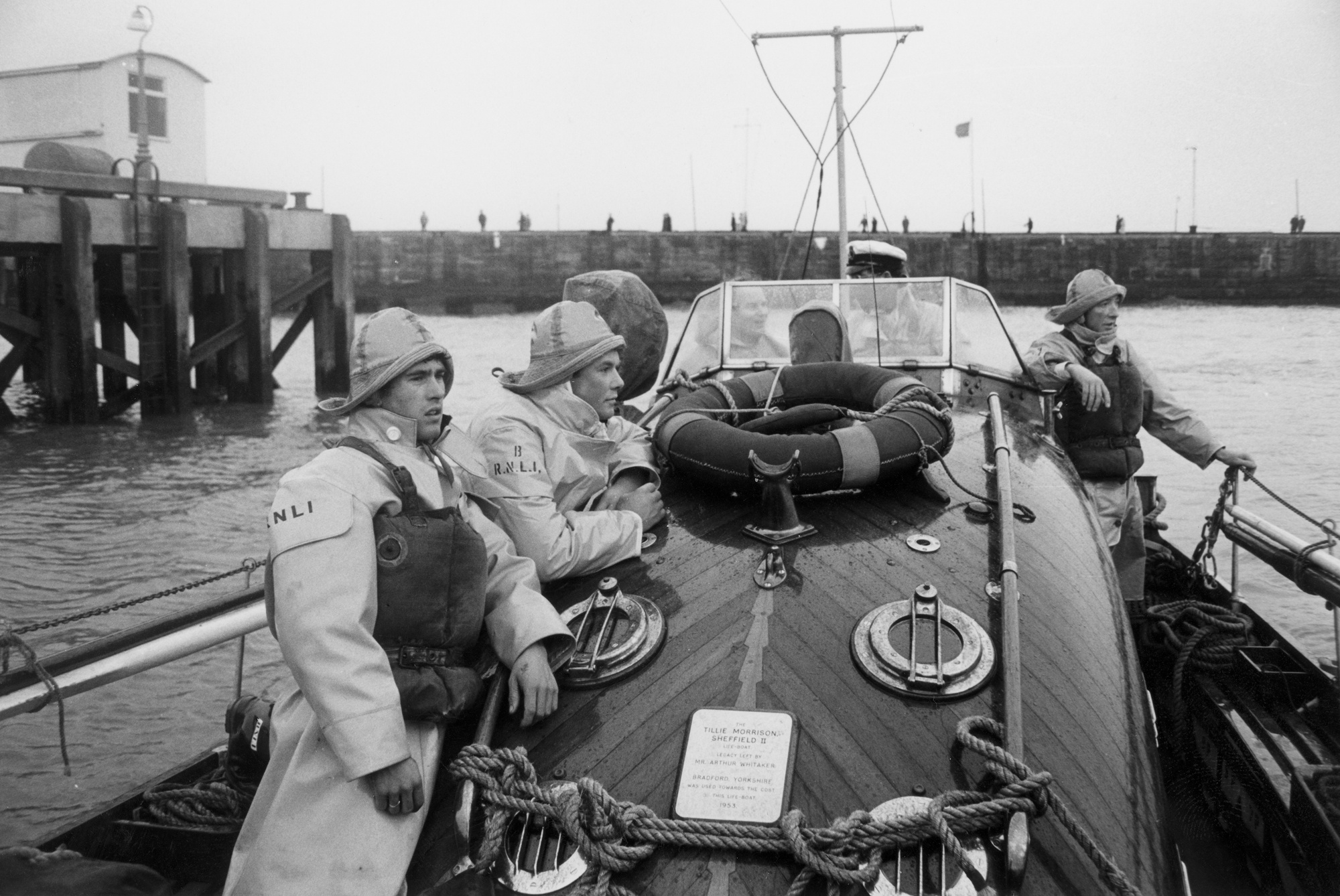 Chaddy’s Charters other loyal team member is Rescue III, a Liverpool Class C, three-skin mahogany hull lifeboat. Built in 1953, the classic wooden rescue boat served as ‘Tilly Morrison’ at the Royal National Lifeboats Institutions Bridlington station on the Yorkshire coast until 1967, rescuing many mariners from those well-travelled waters. The Sumner Lifeboat Institution in New Zealand was the next owner where she was renamed ‘Rescue III’. She retired from her life saving duties in 1993 and repositioned to New Plymouth where she has been taking people around the Sugar Loaf islands ever since.

Rescue III weighs approx. 12 tonnes , has a one tonne iron keel, 156 separate buoyancy chambers and is rated to carry 32 people. It is powered by 2 Yanmar 3JH4E three-cylinder engines. 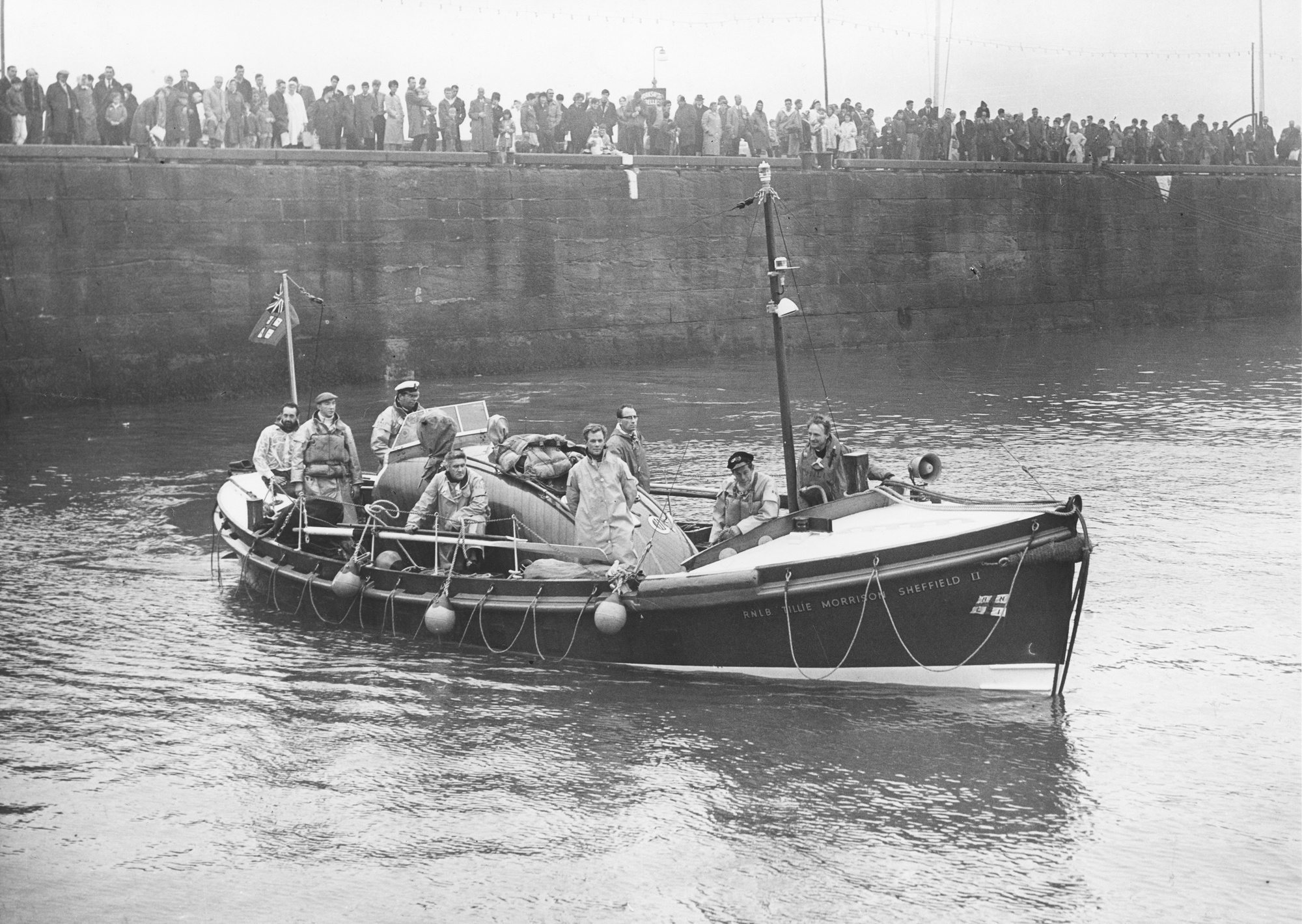 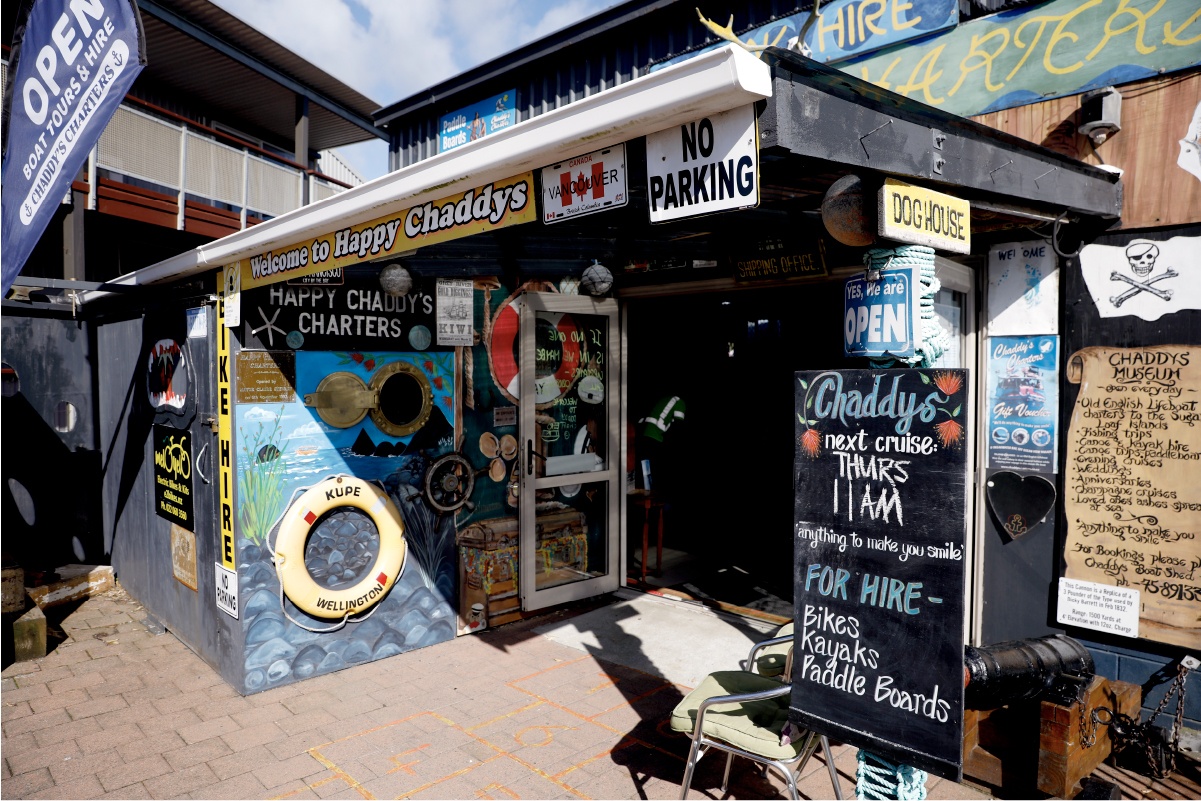 The maritime boat shed, Rescue III’s Port Taranaki home was built in 1992 and was officially opened by the Mayor of New Plymouth in November 1993. It is from here that Rescue III launches down a specially made ramp into the water with its passengers on board. We believe this may be the only life boat ramp launch site that carries passengers in the world.

Since it opened, the owners of Chaddy’s have accumulated a large amount of “nautical” memorabilia which you can see to this day on the walls of the shop. Many people pop in just to look at the many images and artefacts that are on show, noticing different things each time they visit.

Children are enthralled by the seahorse display and can often see little blue penguins nesting on our livestream. 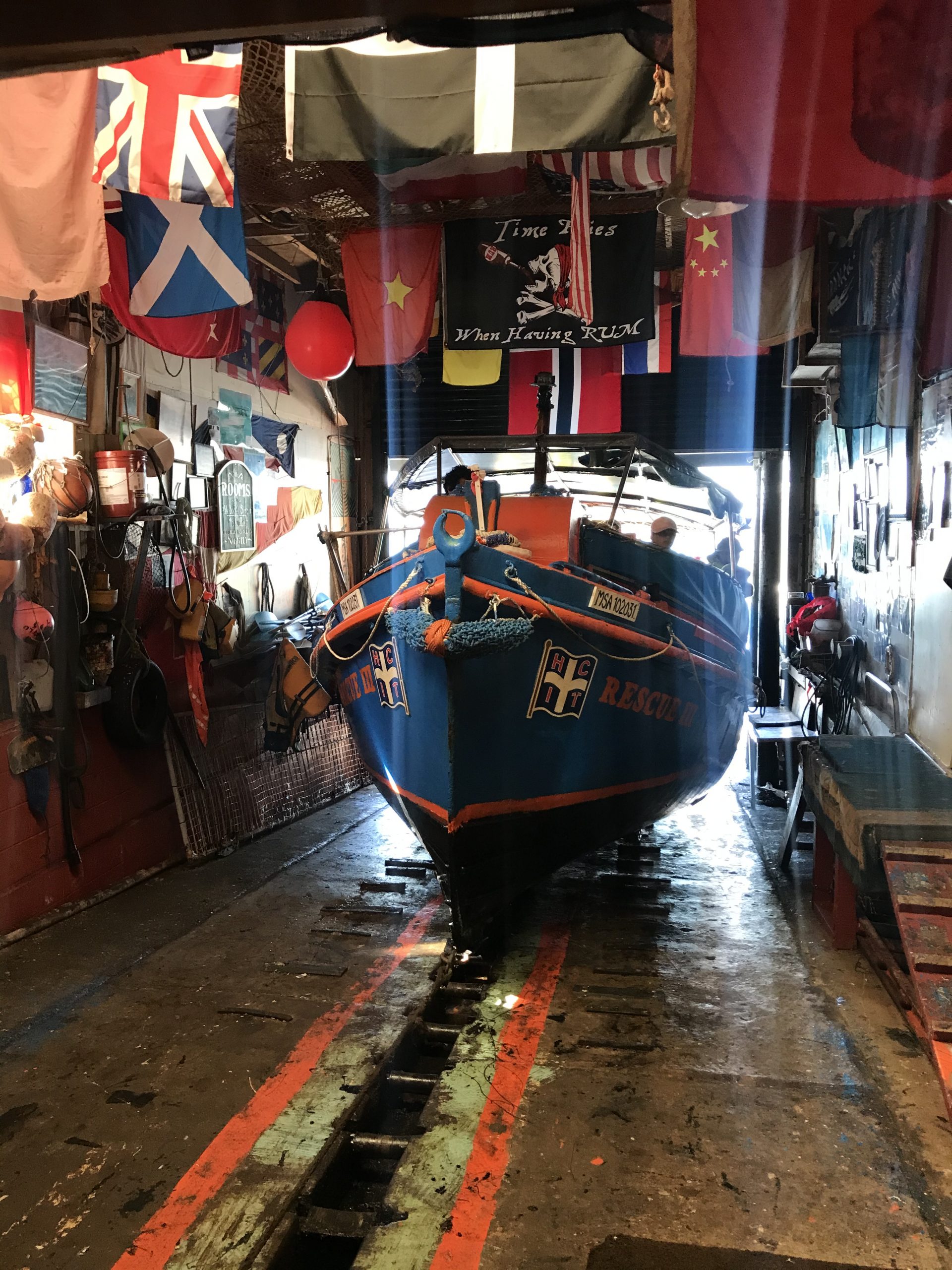 Originally called Ngāmotu (the islands), the site of New Plymouth was occupied for hundreds of years by Māori. More than 60 pā and kāinga (village) sites have been recorded in the urban area. The Ngamotu Beach area provides the only deep water port on the west coast of New Zealand, and is surrounded by several sea stacks and small islands, collectively known as the Sugarloaf Islands. Mataora, Motu-o-Tamatea, Moturoa Island and Mikotahi were hunting, fishing and gathering grounds and places of refuge for the Taranaki and Te Āti Awa People for hundreds of year.

Pākehā traders set up a whaling and trading station at Ngāmotu in 1828, but it was not until 1841–42 that planned settlement by the Plymouth Company brought 868 immigrants from Devon and Cornwall in England to the ‘New‘ Plymouth. The town site was chosen because of its fertile land, gentle terrain and sheltered beach (none of the river mouths were suitable as ports).

The Port of Taranaki was established in 1875, and construction of the main breakwater began in 1881.

The islands today provide shelter for many New Zealand fur seals, little blue penguins and other sea life, and are also a fantastic view point for the coastline and Mount Taranaki.